My two hosted weeks here in November confirmed why Agua Boa is my favorite fishing trip.

The water was a little higher and dirtier than usual, but it didn't seem to make a difference. Most outfitters in the area canceled trips due to very high and muddy water conditions. Not Agua Boa. The Lodge consistently fishes well when other operations are flooded out.

Most of my anglers averaged 30 to 60 peacocks per day, with good numbers of 10 to 19-pound trophy fish. Keith Bell caught a 19-pounder, the largest peacock for the two weeks I was there. He also landed a 17 and 14 pounder on the same day. The 14 pounder was a great story of its own. Keith fought a large fish for a while, and it ended up busting his 40-pound tippet. The guide moved the boat to another area and then, about 30 minutes later, returned to where Keith lost the big fish. He ended up hooking and landing the fish he had lost a half-hour earlier. It still had the other fly in its mouth! Now you know why peacocks are my favorite fish.

Peacock Bass are extremely aggressive and very strong. Speaking of aggressive, Bruce Tyson caught two 3-pound butterfly peacocks at one time on the same single hook fly. The hook point came out just behind the jaw, and the second butterfly was trying to get the fly out of the other butterfly's mouth and got caught on the exposed hook point.

On the last day of my two-week adventure with two groups of anglers, Gary Mintz, our guide Kolbolko and I cut our way into a very remote lagoon. Even with a chainsaw, it still took us a couple of hours. It was worth the effort. Gary had three shots at sight casting to large arapaima while they cruised through the shallow water. One of the fish made a 90 degree turn to follow the fly. I watched the fly disappear twice, but I couldn't tell if the fish took the fly or swam over the top of it. The water had just enough color that I couldn't tell for sure. We also landed several peacocks between 10 and 17 pounds in the same lagoon.

We caught a huge variety of fish. I landed a couple of payara and lost a couple too. During my two hosted weeks, my groups landed a total of eight.

Several anglers landed five or more arowana. Not me. I had lots of shots at them but only landed one. I had quite a few hookups but couldn't get them to the boat. A log that jutted out of the water a couple of inches didn't help me any. I would hook an arowana, try to drag it over the log, and end up pulling the hook out of its soft mouth. I had one about three-quarters across the log, then twang! It came unbuttoned.

Every single angler had peacocks bust 40- or 50-pound Maxima leaders. Peacocks can generate torque that is unbelievable for a 10 to 20-pound fish.

Dave Erickson did the glove, stripee (finger guard), and tape modeling. (See photo - this is the actual way he prepared to fish each day.) If you don't use stripping finger protection such as a good stripping glove, a stripee, electrical tape, or vet tape, you will not be able to fish a second day. Your fingers will be so badly cut up or burned by the fly line you will not be able to fish. I recommend the Buff Elite Glove; it has long cuffs to keep your wrist from getting sunburned and long fingers to keep your fingertips from getting cut. They are also good for sun protection. A few years back, one of my good clients came to me at the end of the first day of peacock fishing and said, "I know, I know, your confirmation (packet) says stripping gloves are a must. I am a striped bass fly angler and know how to fight strong fish on a fly rod, but these fish are so strong and so fast that if I don't wear gloves tomorrow, I won't be able to fish. Do you have an extra pair I could use?" Luckily, I did, and he was able to make it through the week.

Peacocks are not real picky when it comes to flies. If it moves fast, they like most patterns. We caught fish on streamers that were red/white, tan/white, olive/white, blue/white, red/yellow, chartreuse/white, yellow/red/chartreuse, and they liked Whistlers in red/white, yellow/red, and yellow/orange. You can fish the same flies for arowana and arapaima. For arapaima, you let the fly sink to the bottom and do a very slow retrieve just above the bottom. For arowana, you do a slow to medium 12-inch strip, unlike peacocks, where you retrieve with very fast, long strips.

Agua Boa isn't just a fishing trip. It's like being in a National Geographic show all day long. You will see many species of shorebirds, gulls, terns, cranes, egrets, herons, raptors, vultures, small to medium-size parrots, giant macaws, caiman (alligator cousin), freshwater dolphins, giant river otters (up to 80 pounds), lizards, butterflies, freshwater rays, monkeys, and you might see tapir, wild pigs, an anaconda or even a jaguar.

We will be hosting five weeks from late October to early December in 2022. Let us know if you would like to go. A couple of weeks are already sold out. There is some space available for the next 30 days that we can get you into if short notice works for you.

Click here for our main page for Agua Boa Amazon Lodge.
You are not limited to our hosted weeks. Provided there are openings, we can book Agua Boa for a time that works best for you.

Please contact us with any questions you may have. 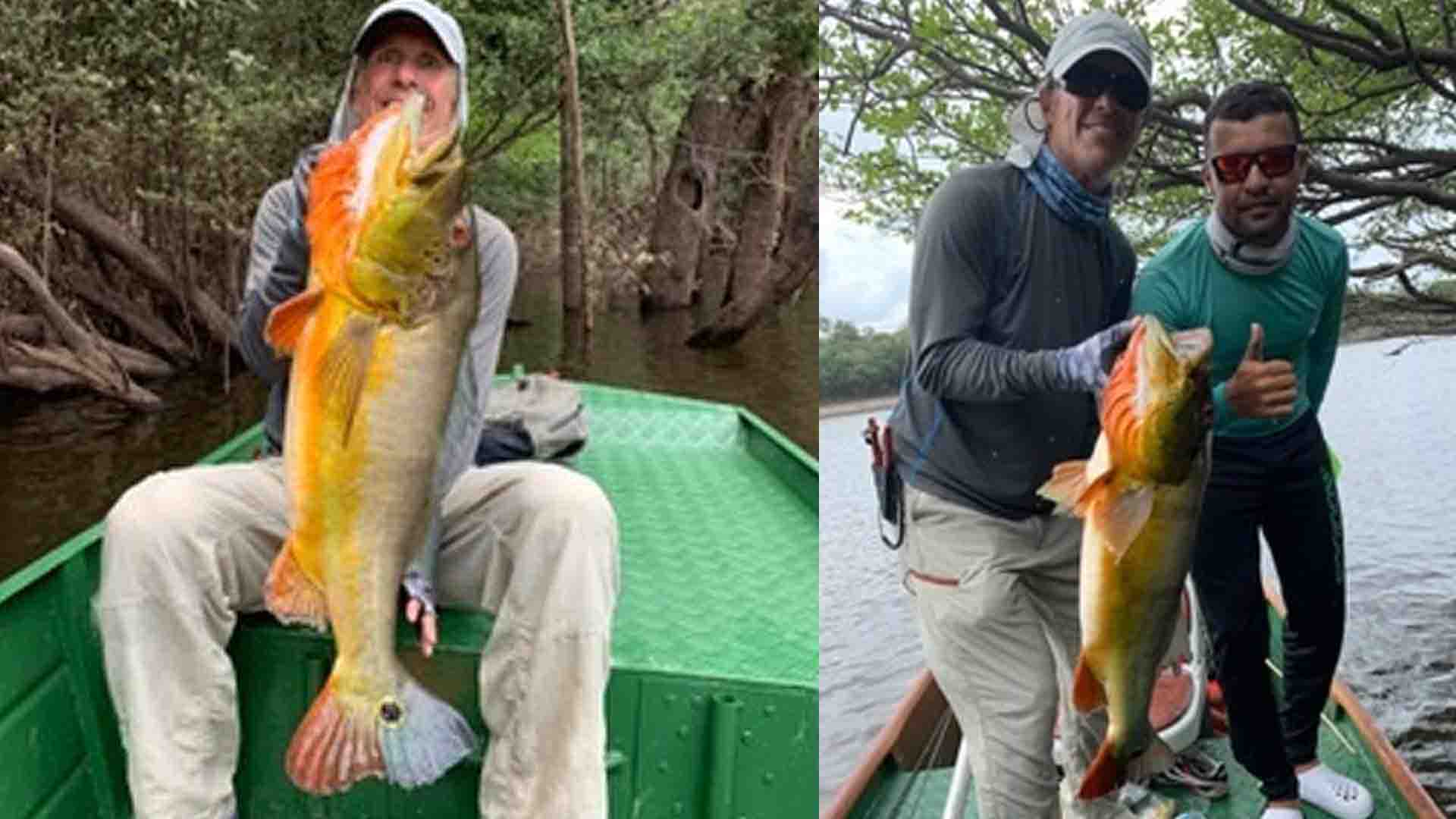 Two Butterfly Peacocks that Bruce Tyson caught on one fly. 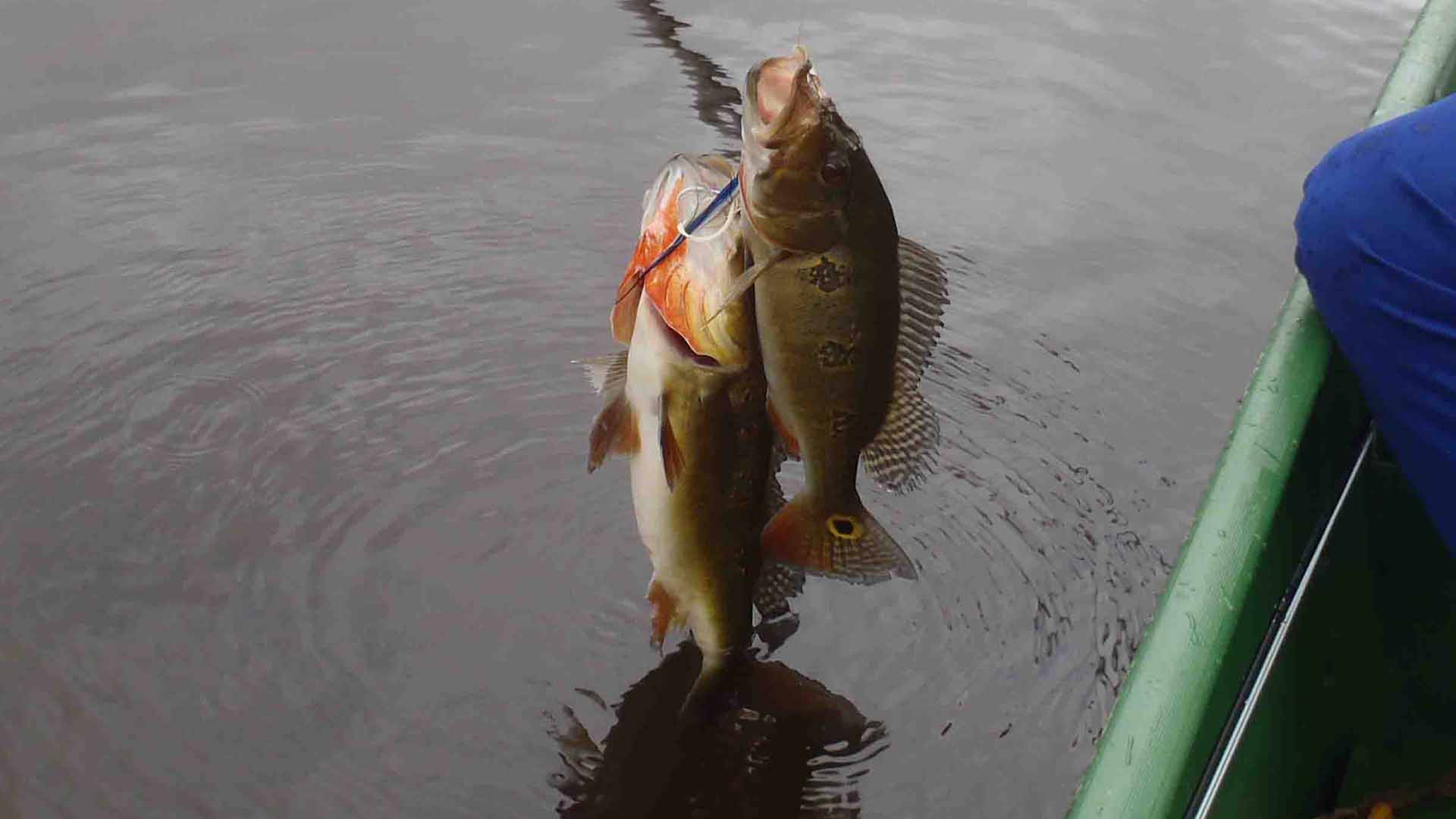 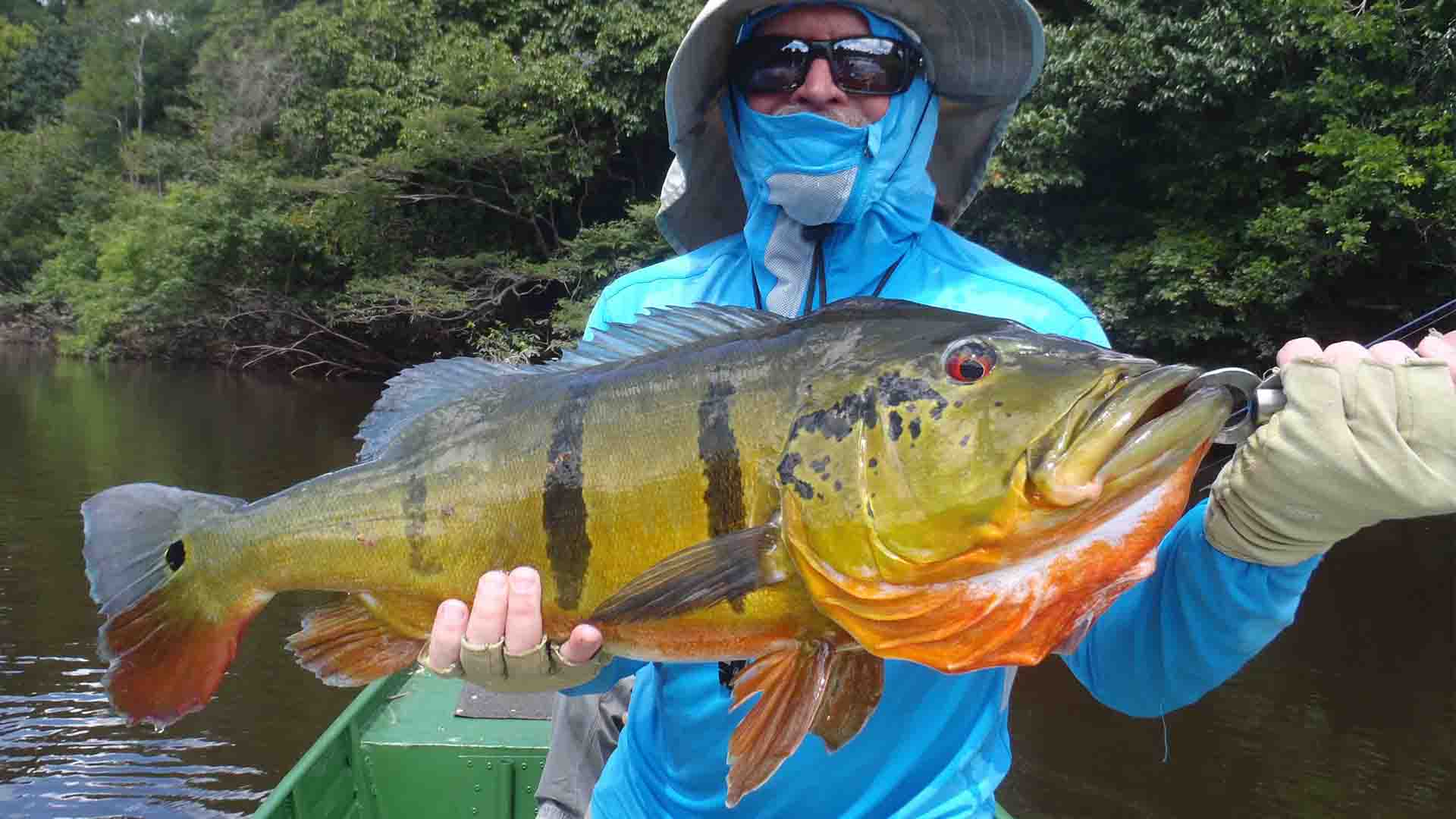 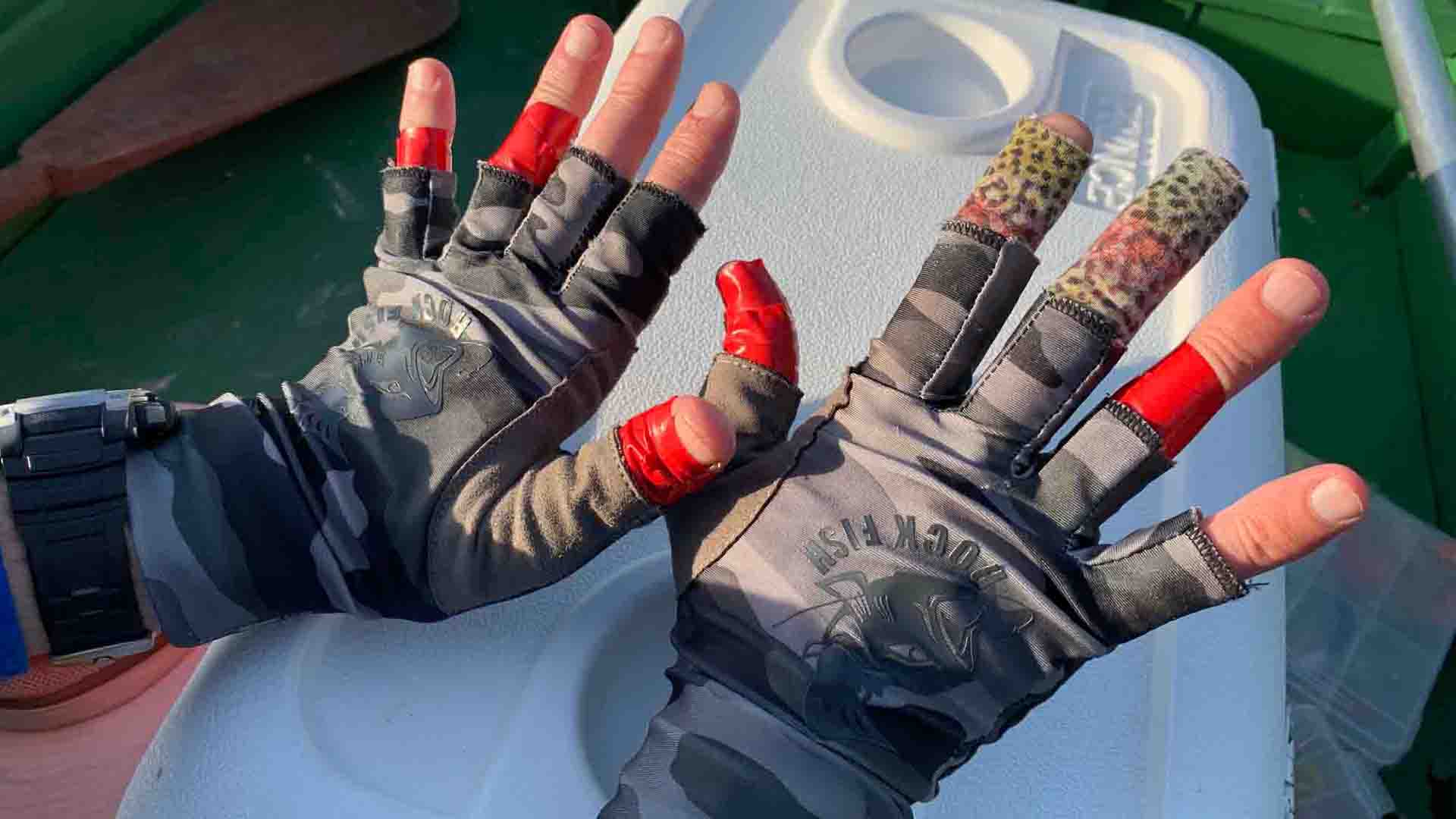 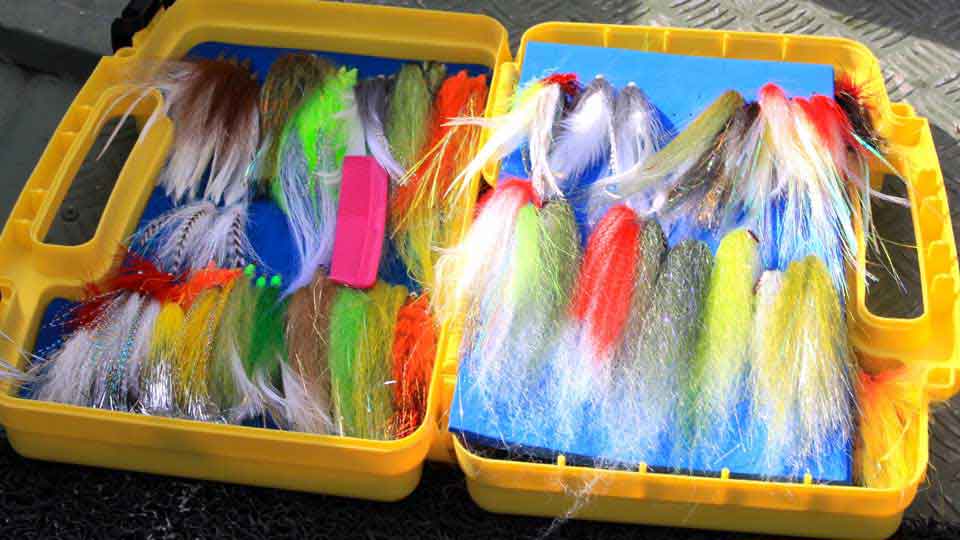 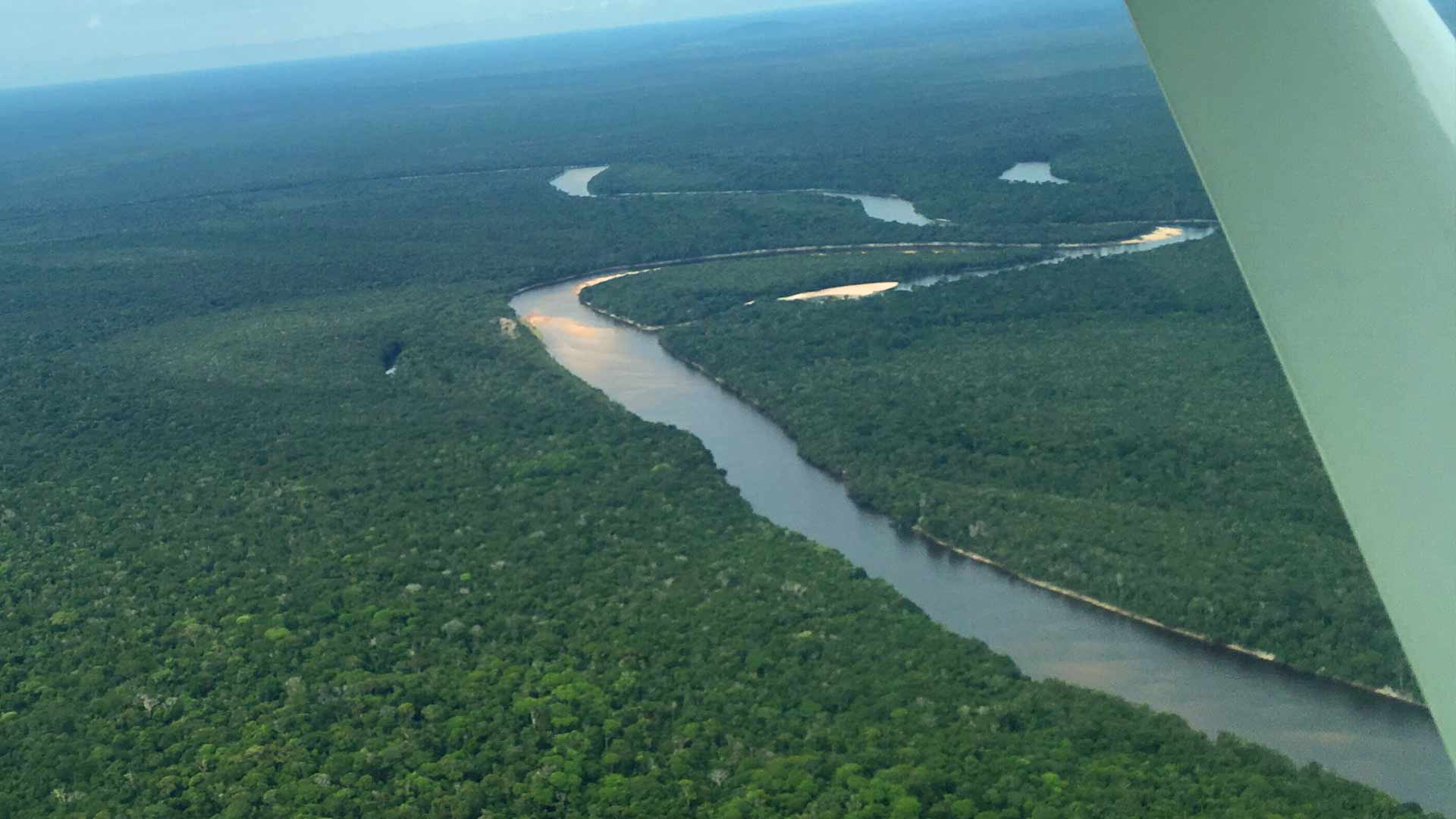 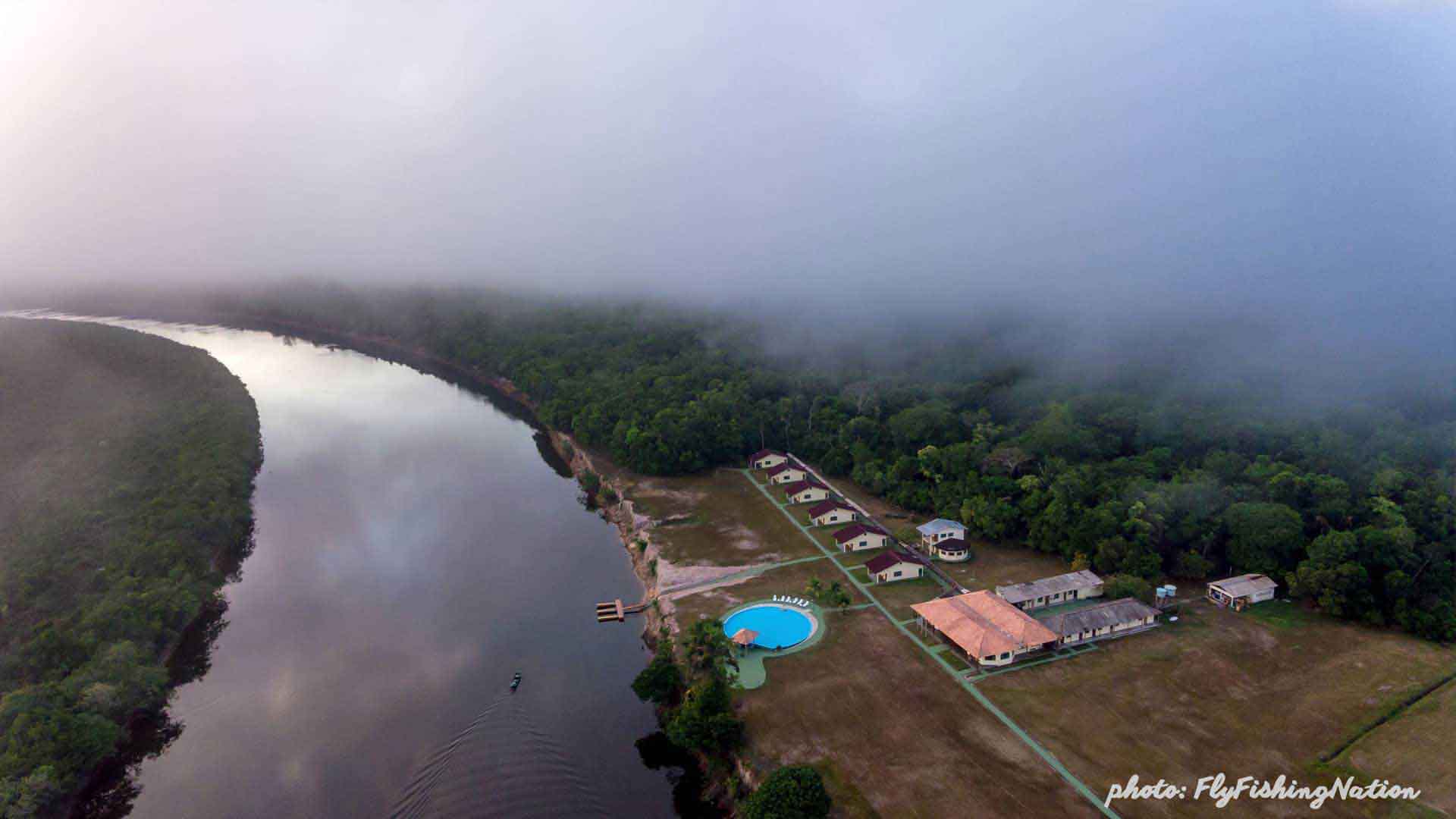 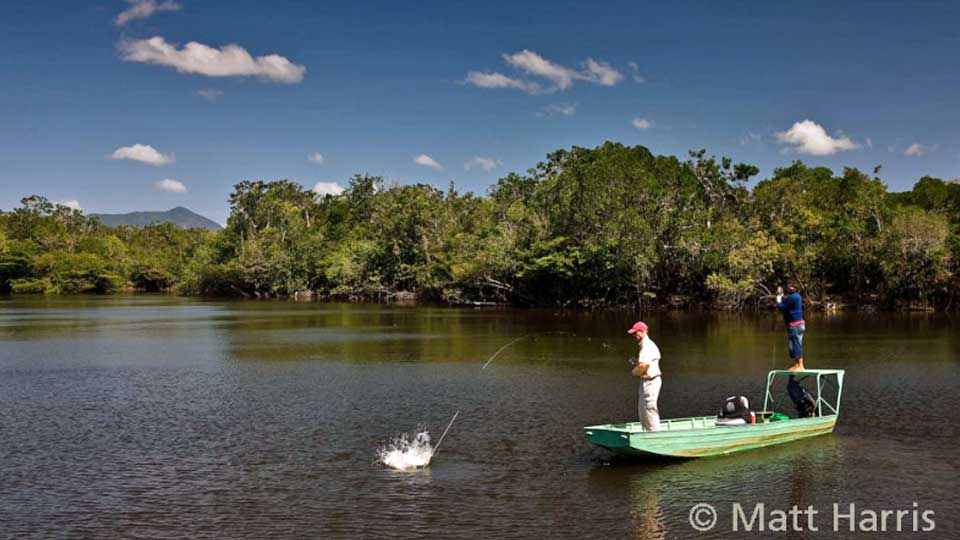 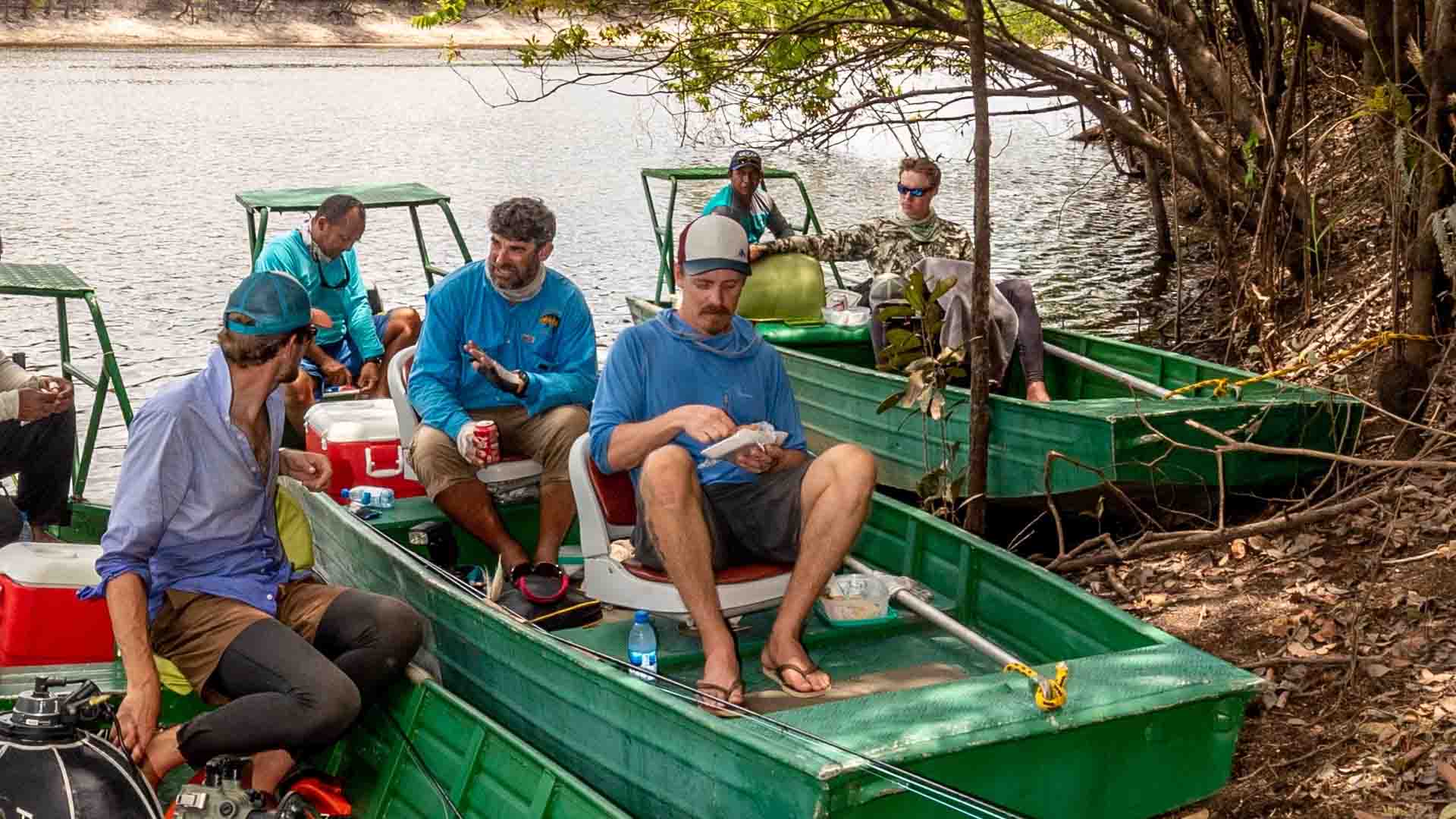 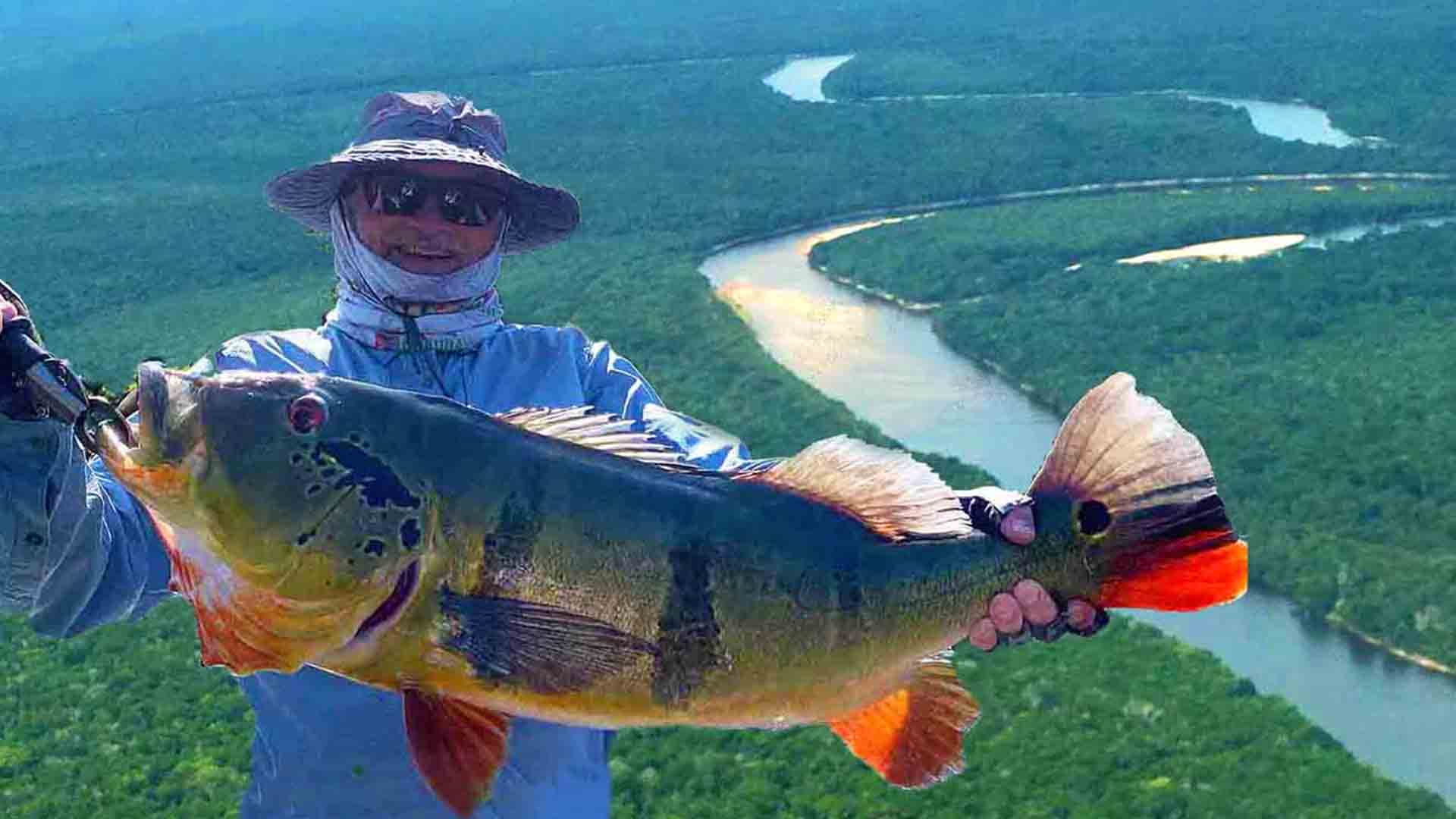 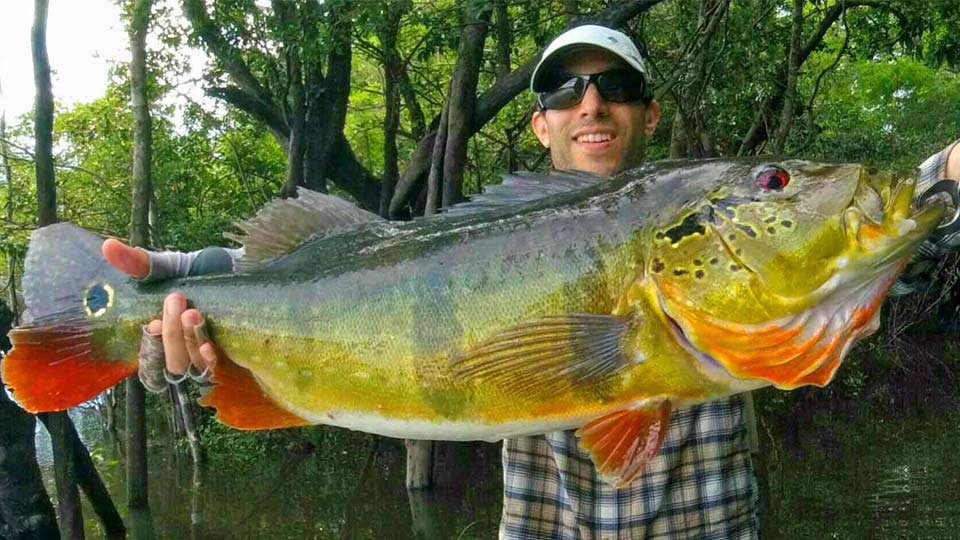 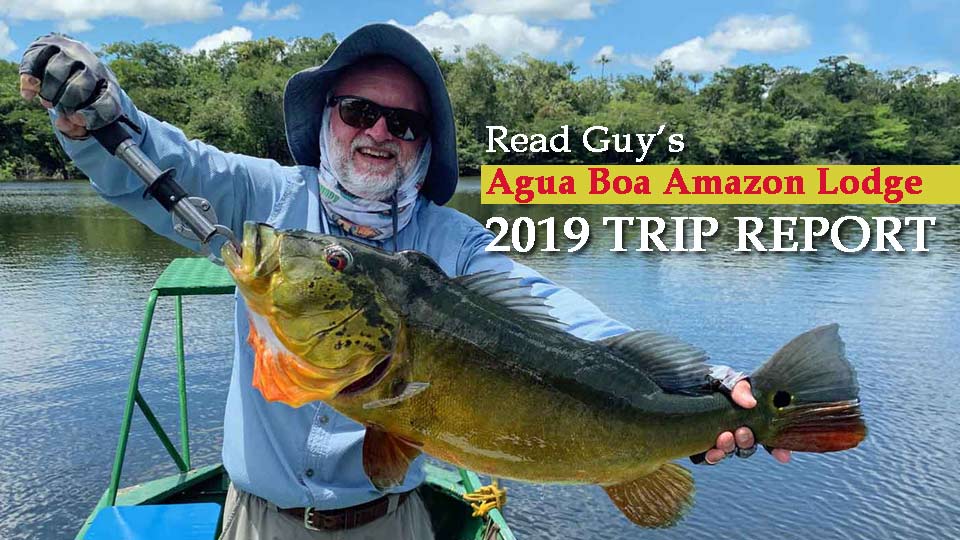 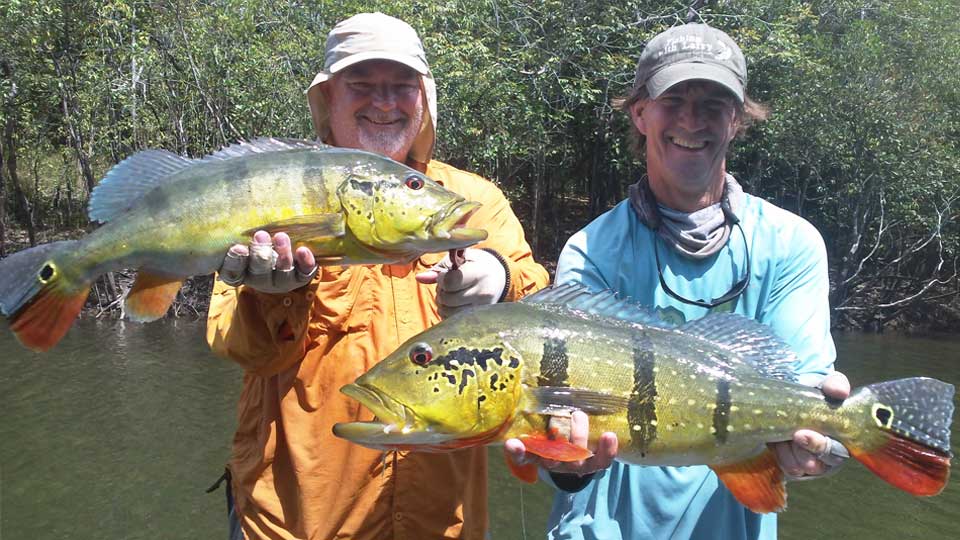