Over the years, I’d heard many stories about how good the fishing is for sailfish off of the Pacific Coast of Guatemala. I had previously fished Bluewater trips in Panama, Costa Rica, and Mexico. Fishing for Sails in Guatemala is arguably the best in the world at this time.

Our Home for Three Days

During the last week of January of this year, I hosted a group of four clients—Stu, Norm, Gayland, and his wife Patty for three days at the famous Sailfish Oasis Lodge in the town of Iztapa. January is one of the prime months to fish for Sails, but the fishing in this area of Guatemala is consistent all year.

After flying all day from Portland, Oregon we were met at the La Aurora International Airport in Guatemala City by Eddie, a very friendly English-speaking driver. Eddie drove us in a private air-conditioned van to the Lodge, a 90-minute drive. Upon arrival, we were offered a nice cold drink from Freddie, the bartender. Throughout our stay at the Lodge, Freddie made sure that our glasses were filled with our beverage of choice. Nick, the Lodge manager, showed us to our rooms, which were very nice with two twin beds and a private bathroom. Nick is from England. He’s worked in Guatemala for eleven years and now calls this area home. We did not stay up late as we knew we had to get up early for our first day of fishing.

The next morning at 5:45 a.m. coffee and tea were ready, and we were greeted by Carina, our charming hostess. (We enjoyed very good breakfasts and dinners at the Lodge and lunches on the boat.) Right after breakfast, Eddie, our driver from the day before, drove us to the marina, a ten-minute drive from the Lodge.

Marina Pez Vela is located in Puerto San Jose. It is the only marina in Guatemala protected by a breakwater structure. At the busy marina, we split into two groups, with Stu and Norm on The Allure II with the famous Captain Chris “Kiwi” van Leeuwen, (he was originally from New Zealand). Gayland and Patty were on the Makina with the entertaining Captain Juanga. I was on the Allure II the first and third day and rode with Gayland and Patty on the second day of the trip. 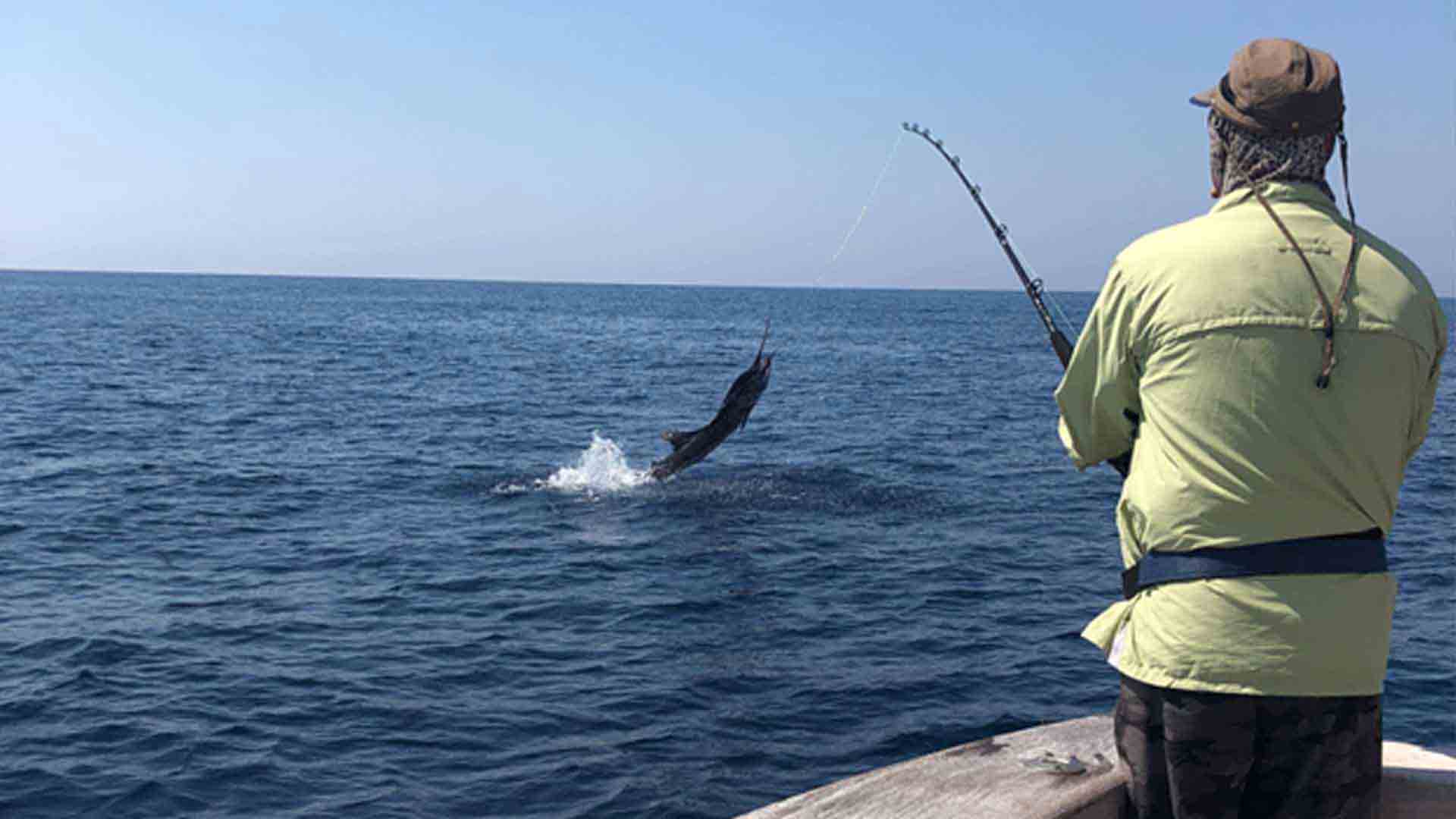 Both boats were in immaculate condition, with quality fishing equipment and two very qualified deckhands on board. The fishing methods were trolling rigged baits, lures and teasers spread out to help attract the fish from a distance. The Sailfish bite was very good all three days, with the first two days being exceptional.

I am not very good at counting fish. I look back on the fishing day as a whole—was there a lot of action or was it a slow day? During the first two days, our two boats hooked and battled with close to 70 Sailfish! The third day it was more of a challenge with only nine landed.
We did not hook into any Marlin on this trip, but we did manage to land about four good sized Dorado. On each boat, one of the deckhands grilled the dorado for a delicious onboard lunch. Fish does not get any fresher than that.

Picture below:  Stu and deckhand with a nice sailfish. 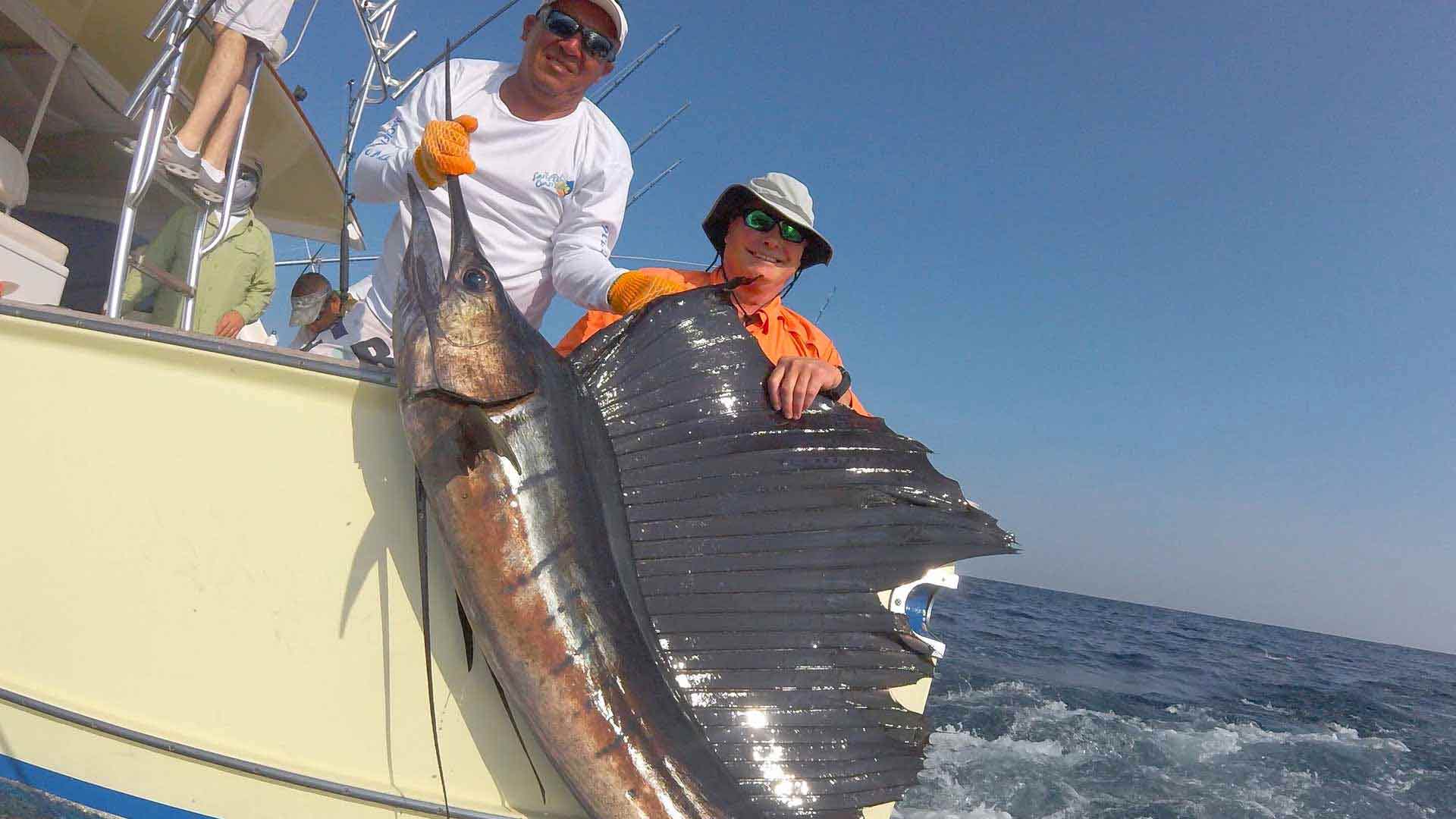 Norm with a nice-sized dorado 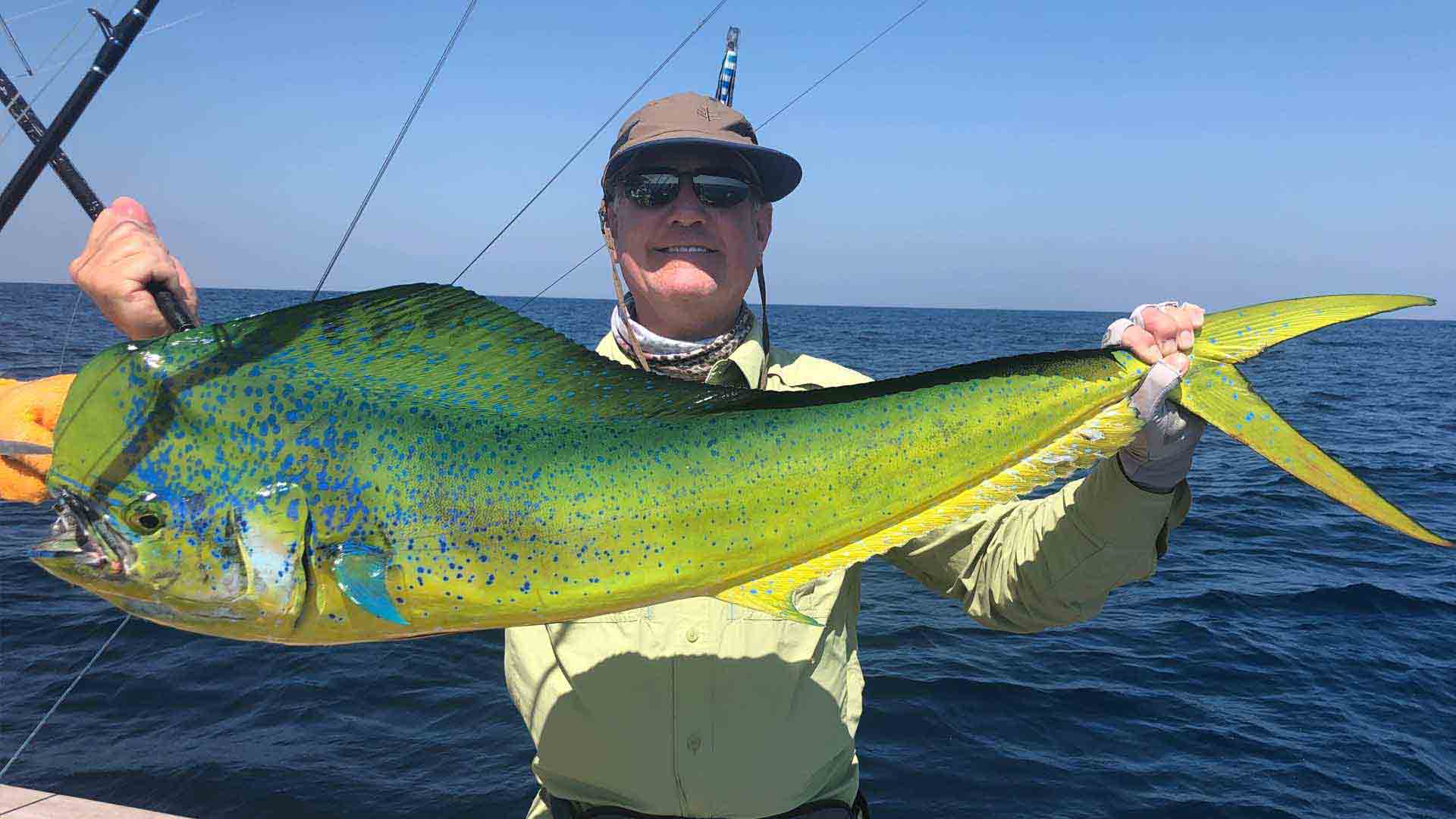 Norm and deckhand with a large sailfish. 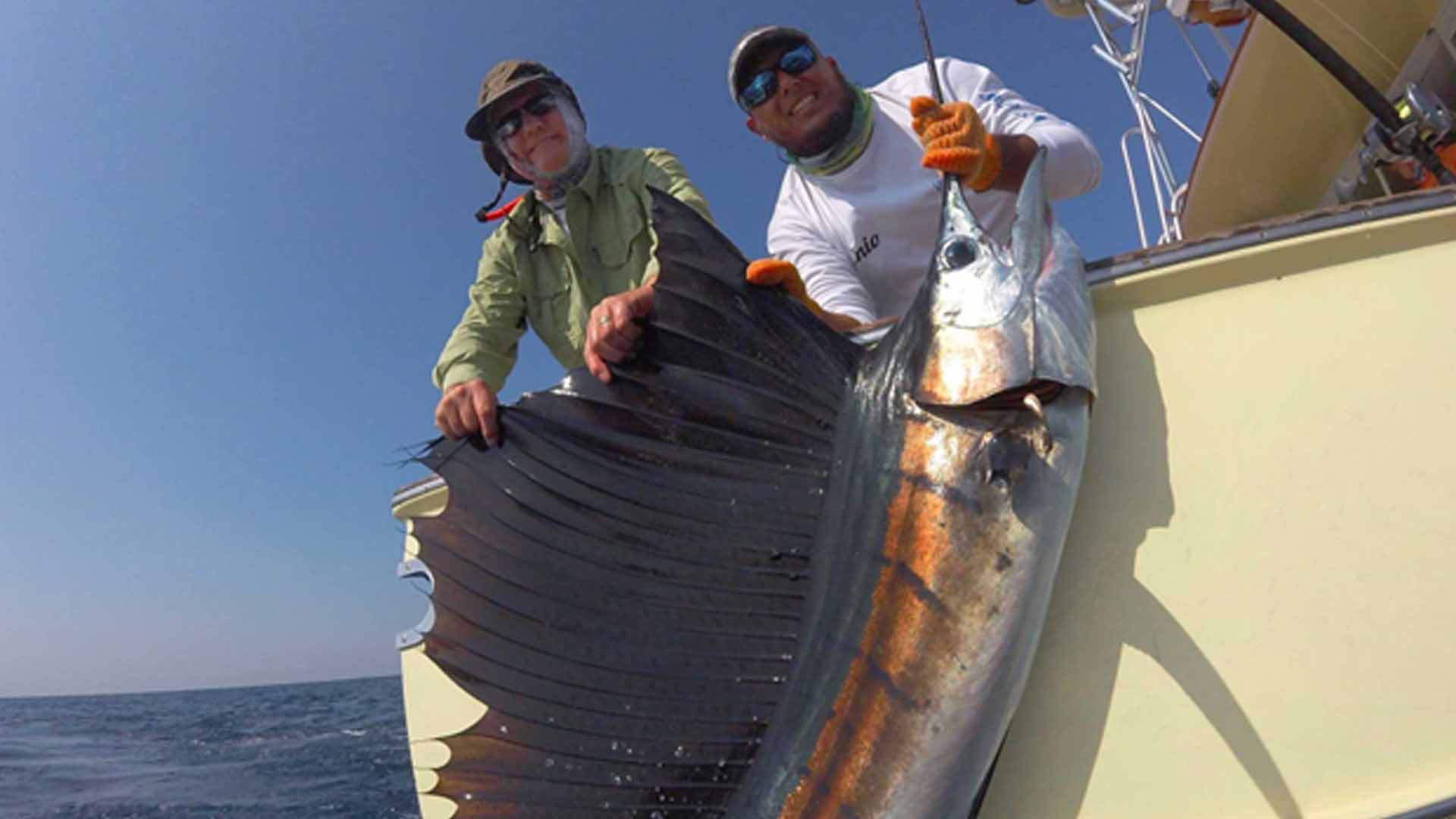 We were scheduled to leave the Lodge after our third day of fishing. We were supposed to stay the last night in Antigua—Guatemala’s old colonial capital—and then fly home the next day. We’d packed our bags and left them at the Lodge with Eddie so, we’d be ready to leave as soon as we hit the dock. As we were heading back in after our last day of fishing, my cell phone lit up with a text from the airline, saying that due to a wave of extremely cold weather in the central U.S. our scheduled flight had been canceled. This meant that we had an extra day to enjoy Guatemala!

Once we reached the docks, we continued as planned with Eddie driving us to Antigua. During the 90-minute drive, we passed Fuego Volcano, (literally fire volcano), that erupted in June of 2018. From the van, we could see plumes of smoke or steam rise in the air for a few minutes, then stop, until another puff of steam would shoot off the top of the volcano. The devastation of the event—fragments of the landscape, destroyed homes and roads—visibly remain. The volcano is only ten minutes from the spectacular city of Antigua, which is a UNESCO world heritage site for its colonial architecture.

We arrived at our hotel the Casa Santo Domingo. (A one-night reservation was made before our trip by Captain Chris’s wife Liz and is a standard service provided by the Lodge.) We were pleasantly surprised to find that this very nice hotel could accommodate our group for the unplanned extra night.
Casa Santo Domingo is a modern hotel, constructed and designed over, and around a 16th to 17th century Catholic convent. The new construction blends nicely with the ancient Church. The hotel has done a good job of sharing the story and preserving the history of this ancient church.

Our day in Antigua

Our day in Antigua could not have been a better experience. We enjoyed some delicious meals at the hotel plus a great lunch at a local restaurant. We walked around the city for a couple of hours looking at the old Spanish colonial architecture and stepping inside stores with local handicraftsThe next morning our driver arrived a little early at the hotel, but it was good for us as we still had a 45-minute drive to the international airport for our flight home.
After being in warm weather for a week and shorts, we had to adjust to Portland’s cold weather. As I was downloading pictures of our trip at home, snow blanketed the ground. 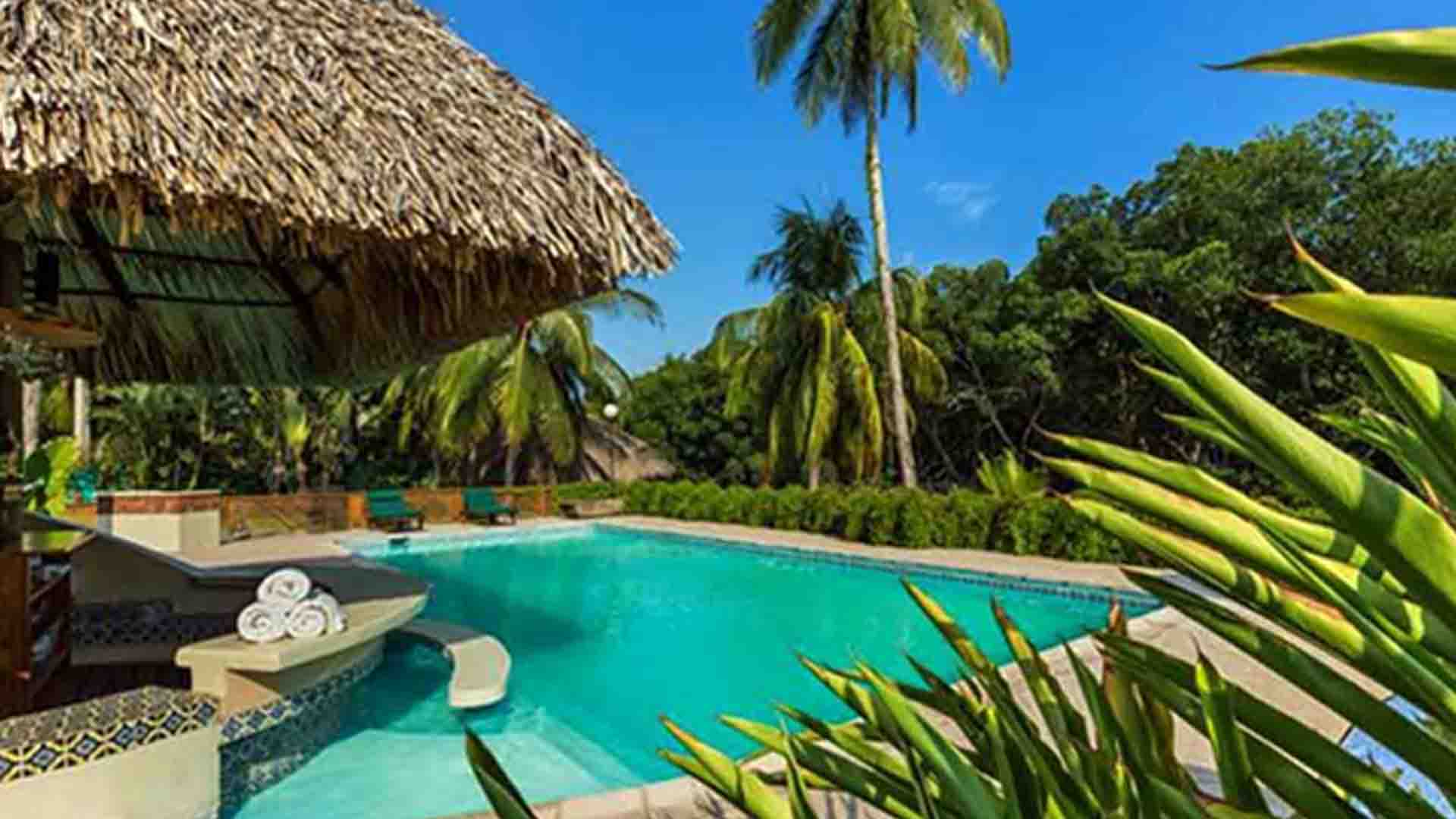 Sailfish Oasis Lodge is a top-quality fishing lodge accommodating up to 20 anglers per week. There are four boat options and the choice of fishing two to five anglers per boat. Captain Kiwi and his wife, Liz work with other boat captains, and they can accommodate different group sizes.

The fishing is consistent throughout the year. The best chances for Marlin are from April through November. Sailfishing is usually VERY good. Captain Kiwi and Liz have a fishing/lodging program that runs flawlessly. They want to do their best for their clients, and many return year after year to fish with them.

We are looking to put a hosted week together in 2021, so let us know if you are interested in joining us. If you have any questions, please, contact us. Both Guy Schoenborn, and I have been to Sailfish Oasis Lodge and can share our individual experiences.